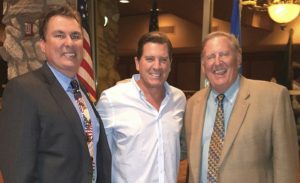 After speaking in Las Vegas last week at the Real Chamber of Commerce Dinner, Fox News star, Eric Bolling was suspended this week after the Huffington Post published a sexual harassment allegation. Bolling, the outspoken supporter of President Trump, is the latest in a line of Fox News Stars targeted and removed in recent months.

Fox News has been under fire for the last several months as their top conservative stars have been picked off one by one. In what is clearly an attempt to silence conservatives on the Mega News Network, Bolling appears to be their lasted victim. Supposedly he sent a sexually explicate text “several years” ago to several women, including, former Fox host Caroline Heldman.

“Eric Bolling has been suspended pending the results of an investigation, which is currently underway,” Fox News said.

An attorney for Bolling, Michael J. Bowe, denied the allegations. “The anonymous, uncorroborated claims are untrue and terribly unfair,” Bowe said Saturday. “We intend to fully cooperate with the investigation so that it can be concluded and Eric can return to work as quickly as possible.”

Bolling is the co-host of The Specialist and was on the Five.