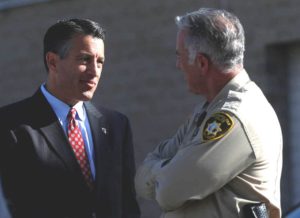 After only 18% of Metro Police Officers voted to support Sheriff Lombardo for reelection last week, Governor Sandoval gave Sheriff Lombardo an award called the Philanthropist of the Year by the Southern Highlands Foundation.

BTW only about 5% of the home burglaries in Southern Highland were solved last year, that’s if you could get a detective to even come out and take a report.

Recently, Nevada Schools were ranked dead last in the Nation behind Puerto Rico and Washington D.C. cementing Sandoval’s eight years as governor as a complete failure. And Sheriff Lombardo’s accomplishments include the worst homicidal rate in 30 years and being named the number one Sanctuary City in the Nation by President Trump last year.

So after 82% of Metro officers refused to vote for Lombardo for reelection, it only made sense to give Lombardo a participation award which is about as valuable as a degree from a Nevada public school.