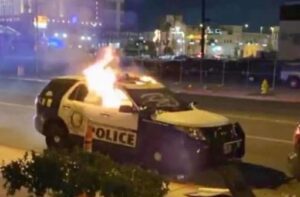 Nevada Democrat lawmakers and Gov. Sisolak, using the Oct, 1 Vegas Mass Shooting as their justification, passed several gun control laws, none of which would have stopped the alleged shooter. Sisolak & the Dems banned private gun transfers and passed the Red Flag law allowing courts and cops to takes guns from folks without any due process.

The new Red Flag law, also known as SB 291, is actually a Restraining Order. The Red Flag law passed in the 2019 Nevada legislature and went into effect on January 1, 2019, allowing anyone to file a Red Flag Restraining order against anyone else without a hearing, without expert witnesses, without medical or psychiatric experts and based solely on hearsay. The judge then determines whether to issue a Temporary 7 day Red Flag Restraining order against the targeted individual. Then the police are ordered to remove firearms from the person’s home with a knock or no knock warrant. Given that the complaint defines the person as too dangerous to possess firearms, the police would have to use their swat teams to seize the firearms.

Armed and masked Antifa looters were allowed to roam Las Vegas streets freely while unarmed citizens were left to suffer and die by the government as a result of Sisolak and the Dems’. Even after a Metro Police officer was shot in the head, Governor Sisolak continued to praise the looters and rioters.

Since Oct 1, we’ve learned the shooting consisted of one man who lawfully obtained firearms at a gun store with a background check, not from a private party at a gun show. He had no mental illness issues that would have triggered any kind of red flag restraining order. So the laws Nevada Dems passed, in the end, had nothing to do with stopping another Oct 1. But thousands of ordinary citizen Democrats learned the hard way, they may want a gun to protect themselves, their families and their homes from looters and rioters during a worldwide pandemic triggering mass toilet paper hoarding.