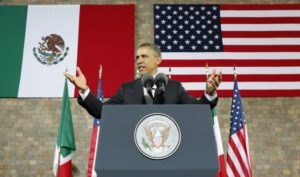 In the eight years Obama was Present, approximately 2.5 Million Join Illegal Population in the U.S. according to Steven A. Camarota is the Director of Research at the Center for Immigration Studies.

In 2014, President Obama signed the first executive amnesty order called Deferred Action for Childhood Arrivals (DACA). Immediately following that, the Southwest border experienced an unprecedented surge of more than 60,000 children from Central America seeking amnesty. According to Immigration and Customs Enforcement (ICE), 97.9% were released to family members living in the U.S. Illegal-alien parents in the U.S. who’s kid’s already here had received a quasi-legal status, including DACA, could then apply to have the children they left behind in Guatemala, Honduras, and El Salvador receive in-country refugee processing, free transportation to the U.S., “resettlement assistance,” and access to free education and other benefits, all at taxpayer expense.

Those who received refugee status were eventually able to apply for permanent residence and citizenship. Those who didn’t qualify as refugees were still eligible for parole and a trip to the U.S. The Obama Administration spent millions advertising the program in South and Central America. The plan resulted in the wholesale importation of illegal aliens shipped right into cities like Las Vegas. States considered Purple, like Nevada, were given high priority in Obama’s illegal alien importation program according to sources.

The public is being told today that DACA only applies to the kids who came into the U.S. with their illegal alien parents before Obama signed DACA and they are victims who deserve a break. But in fact hundreds of thousands of children were imported after Obama signed DACA. There is no distinction made in any proposals by those trying to give DACA recipients amnesty calling into question the entire program’s legitimacy.

Billions of tax dollars were spent to import illegal alien minors, including housing, feeding and transporting them to families, ultimately into Purple states like Nevada, all in an effort to re shape the political landscape and remake Purple states into Blue states. Nevada has seen an increase from around 13% percent in the Hispanic population in 2006 to almost 30% today. According to The Heritage Foundation, there are an estimated 200,000 illegal aliens in Nevada now. Today, one in four kids in Clark County schools are Hispanic. Obama said he was going to fundamentally change America. We just never imagined he would seek to displace Republican voters with foreigners.