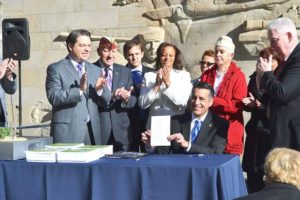 Three years after Gov. Sandoval and Sen. Roberson passed the largest tax increase in Nevada’s history of $1.3 Billion dollars imposed on small businesses, the State’s education rating fell to 51st, dead last even behind The District of Columbia, according to Education Week magazine’s latest Quality Counts report for 2018.

Like last year, the state earned an overall grade of D — below the country’s national C grade.

Roberson and Sandoval continue to stand by their polices to improve education in Nevada. But according to teachers, class sizes have remained stretched, teachers haven’t received a raise in years and the Clark County School District was in the hole some $50 million last year. Roberson did spend Millions on English as a second language classes for immigrant children and on zoom schools. Roberson also fully supported Common Core in our schools.

The fact is that most the money never went to education. Instead it went to funding the hole created in the budget by Sandoval and Roberson expanding Obamacare into Nevada which exploded Medicaid spending.

Health and social services (HSS) was the largest category of state spending in 2016, at $5.1 billion. It accounted for 47 percent of all state spending, and it has been the fastest-growing category of spending over the last decade. In 2006, HSS spending totaled $2.2 billion; so, it has grown 132 percent in a decade. Although population growth and inflation drove demand for these services upward, spending has grown 66 percent faster than these factors combined.

The incomes of Nevada families and businesses grew 27 percent over the same period, while the state’s gross domestic product rose just 17 percent. Hence, drastically faster growth of state spending for HSS has consumed a rising share of our output and increased the burden on Nevada families and businesses by 83 percent. This figure dwarfed the growth in taxpayer burden of spending for K-12 and higher education. All other spending categories combined experienced a reduction in taxpayer burden of 32 percent.

Gov. Brian Sandoval and Nevada lawmakers chose to expand Medicaid along these guidelines at the first available date. Since that time, Nevada’s Medicaid enrollment has nearly doubled, growing from 350,234 at the beginning of 2014 to 650,213 at the close of 2016. As a result, Medicaid is now the largest provider of health care in Nevada.

Sen. Roberson killed the Educational Saving Account Funding in the 2016 special session and failed to fund school choice and ESA’s in 2017. Roberson’s main challenger in the race for Lt. Governor, Former Assemblyman Brent Jones, actually voted for ESA funding and school choice. Brent Jones and his wife Aimee Jones, who’s running for Assembly District 35, have made ESA funding a core principle in their campaigns this year.