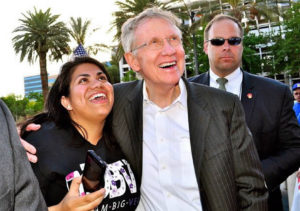 Nevada illegal alien, Astrid Silvia, will give the official Democratic response to President Trump’s State of the Union Speak tomorrow night to a national audience. Silvia rose to national prominence as a close friend of Senator Harry Reid when she gave a prime time speech at the 2016 National Democratic Convention last summer.

According to reports, Silvia is a “Dreamer” who has been in the U.S. for the past 21 years. She also worked for a local George Soros funded group registering people to vote during the last election here in Nevada. She plans to talk to the 11 million illegal aliens currently residing in the US according to her statement.