GOVERNOR SANDOVAL NO SHOW TO STATE GOP CONVENTION AS WELL 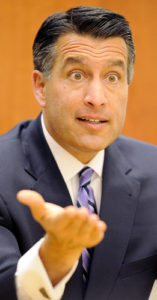 The Nevada State Republican Party held its state convention today and again Republican Governor Sandoval was absent from his own party convention in the middle of a crucial election cycle.  Over a thousand people attended making it a HUGE event in Reno. With the Nevada GOP Civil War in full swing, artillery flying both directions in the media between Gov. Sandoval’s establishment allies and the conservative base insurgent candidates challenging almost every state Assemblymen and State Senator and primary voting set to start in 2 weeks, it’s a bit of a surprise Sandoval failed to show today or at least to last night’s rhinestone dinner.

A bit of a surprise because the Governor was a no show to the Clark County GOP convention last month in Las Vegas where the Trump delegates engulfed the convention taking all the leadership positions. But Gov. Sandoval did come out and endorse Trump this month when US Senator Ted Cruz and the Governor’s choice, Ohio Governor John Kasich, both dropped out. Governor Sandoval has been angling for some time for a spot on the national stage in a future republican administration. But his position on drivers’ licenses for illegal aliens, open borders, common core and a host of other liberal positions may be a deal killer for a future Trump administration.

Yes the Republican State Party has a National Committeeman and National Committeewoman. There’s no word yet on whether the Obama Administration will file a civil rights lawsuit requiring a gender neutral National Committee representative. But NEWSMAXTV.VEGAS recently reported Governor Sandoval authorized changing bathrooms in state office buildings to gender neutral. That may be why Gov. Sandoval failed to show to his own Republican State Convention today. He is out of step with his own base according to many in attendance. And frankly they said “Sandoval would have been met with many many boos if he had attended.”