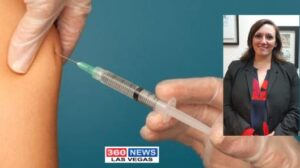 Nevada Senate Majority Leader, Democrat Senator Nicole J. Cannizzaro led the way in support last year from Pharma and other pro vaccine groups. Cannizzaro has been one of the top recipients of big PHARMA money in Nevada since taking office four years ago. Cannizzaro has received large donations from numerous major drug makers, vaccine makers and drugs retailers. she took money from one the largest Pharma groups in the world, Pfizer. As Pharma’s key Nevada Senator, Cannizzaro is under attack by parents groups after supporting forced vaccines for kids in schools.

According to Cannizzaro’s filed Campaign Donations report, Cannizzaro received $2,500 from Pharma, $3,750 from Pfizer and $4,000 from Association of Drug Stores. Cannizzaro received money from Merk and Biogen also through their PAC. Many of these giants are competing to produce vaccines for the corona virus right now. Cannizzaro is also supported by national groups seeking to compel vaccines, even against the will of parents.

IN fact, in April 2019, Cannizzaro supported AB123, described by parents groups “The bill forces children with exemptions to have their federal educational protections waived, so the health department didn’t have to abide by federal rules under FERPA. If the parents wouldn’t sign the paper waiving their child’s privacy rights, they wouldn’t enroll them in school and wanted to deem the child neglected and put them in a state registry. Clark County came in to tell them they couldn’t deem a child neglected without an investigation.” The bill died in the Senate, but Immunize Nevada, the bill’s author, is planning to push forward again.

If Dem Sen. Nicole Cannizzaro gets her way, your kids won’t be allowed in schools without a forced CV19 vaccine and you won’t be allowed to enter businesses and seek employment at casinos with a vaccine ID card.

While everyone is for voluntary vaccinations, and believe people should make their own choices, there are groups actively seeking to write laws to force everyone to take vaccines. Cannizzaro has accepted with open arms donations and support from these groups. IN fact her husband is a lobbyist.

Cannizzaro is running for re-election against local small business owner and attorney April Becker. Cannizaro only won Nevada Senate District 6 by less than 900 votes out of 56,000 total votes cast.