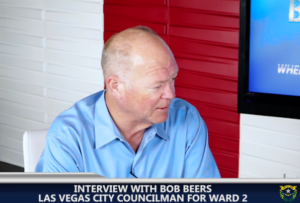 The race for Las Vegas City Council Ward 2 is burning hot right now as both candidates take aim at hot button issues. City Councilman and incumbent Bob Beers has started running ads promising to continue to fight any effort by his opponent, Steve Seroka, to turn the city into a sanctuary city.

Steve Seroka said at a recent candidate forum debate in response to a question about his position on sanctuary cities “If you’re a hard working, law abiding contributing member of our community, you and your family should not live in fear.”

Councilman Beers said in response to our story “I am against sanctuary cities. I’ve read Mr. Seroka’s words backwards and forwards and I just can’t tell what his position is. So, Rob, I can not help contrast the two of us. For my part, I have consistently opposed making Las Vegas a sanctuary city since I started working at City Hall five years ago. I will continue to lead the opposition. I wish people would do their own research. Anyone subject to an ICE detainer is seriously bad people.”