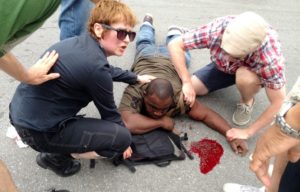 According to local reports, Florida SWAT teams took 3 hours to entered the building and engage the Radical Muslim terrorist in the Gay nightclub Saturday night where 50 people were murdered. Imagine being shot and waiting for 3 hours for the police to rescue you while you’re in pain and scared. All while the terrorist is still hovering above you while you lay in a pool of blood dying slowly. According to reports the FBI had this guy on their radar for years. And all the national liberal media today can focus on is the assault weapon used by the killer, but the fact is the police with assault weapons took 3 hours to breach and clear the building after the shooting started. Remember it took 3 hours the next time Hillary Clinton and Obama tell you to surrender your gun rights and promise to protect you. Remember it took 3 hours the next time a court like the 9th Circuit tell us we don’t have an individual right to carry our gun concealed. Remember it took 3 hours the next time some politician claims more background checks will make us safer.Remember this, you are the first responder in a crisis.