As an online conservative news outlet, 360News Las Vegas can relate to being censured by Facebook with broad allegations of violating community standards without any specifics from Facebook as Info Wars now claims happened to them.

“More content from the same Pages has been reported to us — upon review, we have taken it down for glorifying violence, which violates our graphic violence policy, and using dehumanizing language to describe people who are transgender, Muslims and immigrants, which violates our hate speech policies,” states the post. 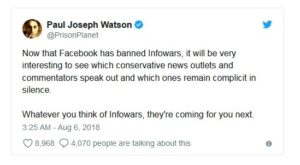 The real question here is, is Facebook a monopoly which has benefited from defamation lawsuit protection laws written by the U.S. government, meddled in elections by manipulating boasting and reach of liberals and conservative candidates and reduced the reach and exposure of conservative pages, closed conservative websites while expanding liberal pages and sites? Is there any real competition in the market place in the social media space to FB?

For those who say Facebook is a private company which can do whatever it wants, should that apply to utility companies as well? Of course not. Private monopoly utility companies must live with strict governmental regulations but in return they benefit from market dominance and government protections.