RINO MARK AMODEI VOTES WITH PELOSI/BLM TO TEAR DOWN STATUES

RINO MARK AMODEI VOTES WITH PELOSI/BLM TO TEAR DOWN STATUES 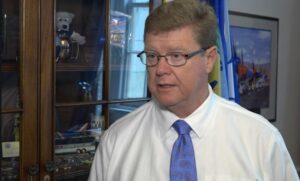 As Antifa and BLM Democrat front groups continue their rampage through the country ripping down our history, good and bad, Congressional Democrats now want to remove the statures of anyone associated with the civil war including those who fought for the union, like General Grant. Dems hope to erase their own racist history in the process.

A bill, sponsored by Rep. Steny Hoyer (D-MD), tears down a bust of former Supreme Court Justice Roger Brooke Taney sitting in the U.S. Capitol. All 232 House Democrats voted for the legislation, along with these 72 House Republicans.

Amodei voted with Nancy Pelosi and BLM. Amodei has voted with Pelosi 57% through out his time in Congress.

Interesting to note, Supreme Court Justice Roger Brooke Taney opposed Lincoln suspending Habeas Corpus during the civil war. Dems/BLM wants to tear down his statue because of his vote for the Dread Scott Case.