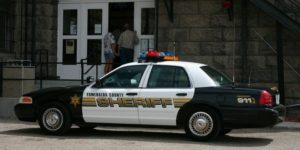 This week, Sheriff Elgan joined the effort to defend the 2nd Amendment and joined 6 other nevada Sheriffs who have all taken a pledge not to enforce unconstitutional guns laws passed by the Democrat dominant legislature.

A letter to the Citizens of Esmeralda County from your Sheriff, Kenneth N. Elgan, regarding the new SB 143 Law.

To the Residents of Esmeralda County:

Recently the Nevada Legislature passed and Governor Sisolak signed into law SB 143 regarding Background Checks of Private Sales and Transfers of Firearms within Nevada.

I, Sheriff Kenneth N. Elgan, am opposed to any legislation which would infringe upon a citizens God given right to keep and bear arms pursuant to the 2nd Amendment of the United States Constitution. I will not participate in the enforcement of this new law and I will certainly not stand silent while the citizens of Esmeralda County are turned into criminals due to unconstitutional actions of the Nevada Legislature or Governor Sisolak.