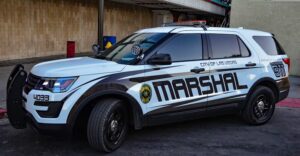 The Las Vegas City jail, not Metro Police, has just released a statement that they too will now stop turning over illegal aliens to ICE. The City of Las Vegas handles only misdemeanors.
LVMPD Sheriff Lombardo got a lot of flak from locals today after he announced his department will now stop cooperating with ICE. Under the Section 287(g) of the Immigration and Neutrality Act, LVMPD cooperated with ICE with funding from the Department of Justice.

This all stems from a recent Federal Court ruling in California where the judge ordered local authorities to cease turning over illegal aliens to ICE who have holds due to ICE’s alleged poor record keeping.

Posted on Twitter today by the City of Las Vegas:

“Our City Attorney has determined that we will also suspend our 287(g) agreement with ICE and will not detain inmates on federal immigration holds due to a California court ruling.
We’d like to remind the public that our city jail is for misdemeanors only. https://twitter.com/LVMPD/status/1187095851224584192 …”

The Trump Administration is expected to file an appeal with the Ninth Circuit Court of Appeals. No word on if Lombardo and the City Marshall will reverse their new policy if the Ninth Circuit strikes down the lower court order.