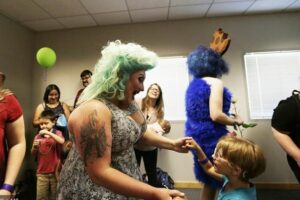 A Drag Queen who read stories to children at a Houston public library last year is a convicted pedophile considered to be at risk of repeating his offense — a fact uncovered by parents opposed to “Drag Queen Storytime,” not by library officials, law enforcement, or the supposed watchdog news media.

According to KHOU, which was informed of the story by a group of pro-family activists calling themselves MassResistance, “A media spokesperson for the library confirmed one of the program’s drag queens, Tatiana Mala Niña (Tatiana “Bad Girl”), is Alberto Garza, a 32-year-old child sex offender. In 2008, he was convicted of assaulting an 8-year-old boy.” He was sentenced to five years’ probation and community supervision. The Texas Sex Offender Registry says Garza is at “moderate” risk of reoffending.

“In our review of our process and of this participant, we discovered that we failed to complete a background check as required by our own guidelines,” library officials said in a statement. “We deeply regret this oversight and the concern this may cause our customers.”

“We assure you that this participant will not be involved in any future … programs,” the officials added, saying they “are taking the appropriate action to ensure that the status of every participant in every program throughout our system is verified.”

Any reasonable person would see that “Drag Queen Story Hour” is a train wreck waiting to happen. It’s a program whose goal is to make children feel comfortable about LGBT behaviors. It features cross-dressing homosexual men in garish make-up and costumes who seem obsessed with reading “gay” themed books to very young children. These same men lead bizarre lives as “adult” sex entertainers. What could possibly go wrong?