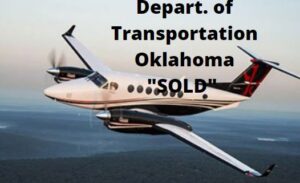 One would think the Governor of Oklahoma, with its population of 3.9 million people living within 69,000 square miles, would need a state owned airplane to travel to the far reaches of his state. But the new Republican Governor, Kevin Stitt, sold off the government owned plane as one of his first official acts when elected in 2019. In contrast, Nevada Governor Steve Sisolak is selling off Nevada’s state owned planes and replacing them with much newer, more expensive planes, $14 million worth.

As reported in the CNHI Oklahoma Reporter:

Now approaching eight months without the plane, his staff said the Republican governor doesn’t regret the choice to sell it. Stitt said it cost taxpayers about $1 million a year.

“The governor would say there (have) been constraints at times, but not to the point that he would go buy an airplane just for himself,” said Donelle Harder, a senior adviser to governor.

Stitt prefers to drive around Oklahoma because he likes to make multiple stops, use the time to make phone calls and hold meetings, she said.

Still, when Stitt meets with other governors, one of the first questions asked is why he’d sell the gubernatorial airplane, Harder said. She said Stitt still has access to other state-owned aviation options, but they’re smaller and slower than the King Air 350.

When he opts to fly privately in one of the remaining smaller options, he definitely stands out when parked amid a field of more expensive, higher-end gubernatorial rides.

Oklahoma sold its plane at auction in March for $1.27 million, said Jake Lowrey, with the Office of Management and Enterprise Services. The proceeds from the sale funded the state trooper academy.

The majority of the nation’s governors have a plane.

But business leaders aren’t judging the state by its air fleet, Harder said. They’re more interested in its policies and interacting with Stitt.

He believes in leveraging and sharing aviation assets with other agencies to cut costs, and he uses other state planes or helicopters for time-sensitive trips, Harder said.

“His belief is we need to be as efficient with our resources as possible,” Harder said.

Private air travel without the King Air does take an hour or two longer because the remaining planes are smaller in size and engine. But Stitt balances the costs of a commercial air ticket versus the gasoline costs that come with flying privately, she said.

For long-distance flights, Harder said it is sometimes faster and more cost-efficient to fly commercially.

And in addition to selling the governor’s plane, the state also off-loaded the King Air previously owned by Oklahoma Bureau of Narcotics, said Sarah Stewart, a spokeswoman for Department of Public Safety.

Two civilian positions were not refilled after pilots retired this year, she said. The attrition saved the state about $120,000 a year.

“We no longer have the aircraft, so we are saving on parts, maintenance and operational costs,” Stewart said in an email. “We are able to fulfill our law enforcement missions with a state-owned helicopter.”

But in a January opinion piece for Oklahoma Policy Institute, former House Speaker Steve Lewis noted Stitt isn’t the first to try to operate without a gubernatorial jet. Gov. David Walters sold his in 1993.

“The state airplane is low-hanging fruit for a new governor who wants to show he’s frugal with taxpayer money,” he wrote. “Most Oklahomans don’t have access to a private airplane and probably feel their public servants in Oklahoma City can live without it, too. But I’ll bet if Gov. Stitt waited a year to make that decision, he might not make the same choice.”

Lewis, who could not be reached for comment, said Stitt and Lt. Gov. Matt Pinnell will be busy.

“If they are going to sell Oklahoma as they want to, they may need the flexibility of frequently available air transportation,” he said.