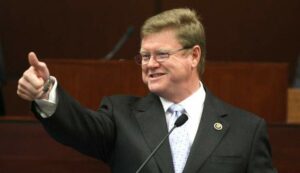 The Resolution was originally submitted on Oct 15, 2019 for Representatives to consider supporting. Amodei reversed course and signed on after numerous voters called Congressman Amodei’s office, according to his Washington DC. staff.

IN THE HOUSE OF REPRESENTATIVES
October 15, 2019

Mr. Biggs submitted the following resolution; which was referred to the Committee on Ethics

Whereas President Trump released the transcript of a call between him and the President of Ukraine;

Whereas President Trump subsequently released the whistleblower complaint of August 12, 2019;

Whereas, in a September 26, 2019, hearing on the whistleblower complaint, House Intelligence Committee Chairman Adam Schiff purported to relay the content of the phone call to the American people;

Whereas, instead of quoting directly from the available transcript, Chairman Schiff manufactured a false retelling of the conversation between President Trump and President Zelensky;

Whereas this egregiously false and fabricated retelling had no relationship to the call itself;

Whereas these actions of Chairman Schiff misled the American people, bring disrepute upon the House of Representatives, and make a mockery of the impeachment process, one of this chamber’s most solemn constitutional duties;

Whereas, for more than 2 years, Chairman Schiff has spread false accusations that the Trump campaign colluded with Russia;

Whereas, on March 20, 2017, then-Ranking Member Schiff read out false allegations from the Steele dossier accusing numerous Trump associates of colluding with Russia;

Whereas then-Ranking Member Schiff falsely claimed in a March 2017 interview to have “more than circumstantial evidence” of collusion with Russia;

Whereas then-Ranking Member Schiff negotiated with Russian comedians whom he believed to be Ukrainian officials to obtain materials to damage the President of the United States politically;

Whereas, according to a New York Times article on October 2, 2019, Chairman Schiff’s committee staff met with the whistleblower prior to the filing of his complaint, and staff members communicated the content of the complaint to Chairman Schiff;

Whereas members of the Intelligence Committee have lost faith in his objectivity and capabilities as Chairman, with every Republican member on the Committee having signed a letter calling for his immediate resignation as Chairman; and

(2) Representative Adam Schiff will forthwith present himself in the well of the House for the pronouncement of censure; and

(3) Representative Adam Schiff will be censured with the public reading of this resolution by the Speaker.