DID THE SOUTHERN NV VA PR GUY LIE OR IS HE JUST INCOMPETENT?

DID THE SOUTHERN NV VA PR GUY LIE OR IS HE JUST INCOMPETENT? 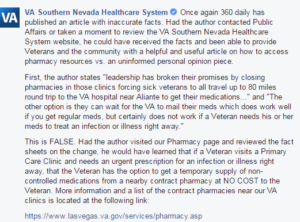 A couple of weeks ago 360Daily.net ran a story about the VA closing its pharmacies at the four brand new clinics they just spent $100 million to build and instead now forcing Veterans to drive up to 80 miles round trip to pick up their meds at the VA hospital in North Las Vegas near Aliante.

The VA PR guy responded on our facebook page claiming “Once again 360 daily has published an article with inaccurate facts.” But yesterday I personally asked the VA at the North West Clinic to let me pick up my meds at a local contract pharmacy as the VA PR guy had described and even showed them the website link he referred our readers to. They said that program does not exist. Only Vets on the choice program may pickup meds in an emergency from a local contract pharmacy. But the rest of us must drive up to the VA hospital and wait in line.

So the question is did; the VA PR guy lie or was he just incompetent?