CHILD CUSTODY GIVEN TO CONVICTED VIOLENT FELON BY JUDGE DUCKSWORTH

CHILD CUSTODY GIVEN TO CONVICTED VIOLENT FELON BY JUDGE DUCKSWORTH 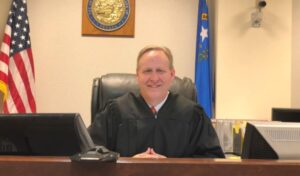 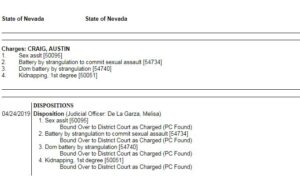 Larosee has been in Family Court fighting for custody of her two sons for the past three years. Recently Controversial Family Court Judge Bryce Ducksworth gave her ex husband, a convicted violent felon, unsupervised overnight visits every other weekend from Thursday thru Sunday after he sees a counselor for four visits. BTW this isn’t the first case brought to us. We have a long list of parents complaining to us about violent ex-spouses granted unsupervised overnight visits by Clark County Family Court judges. Larosee is just the most recent case.
.
Larosee explained an incident when her ex tossed her son, who is almost 2 years old, on the bed and turned up the television.  She continues by saying that she was shoved into the closet then her head was slammed against the wall with his hands on her neck. She was then shoved onto the ground while still being strangled. Larosee explained that her ex-husband then forced his penis into her mouth and forced her to perform oral sex.
.
Larosee said she then went unconscious, when she regained consciousness she was laying on the floor gaging for air. The police weren’t called immediately. Larosee said the trauma set in coupled with embarrassment. Larosee said her ex admitted by bragging about the incident to his best friend and his best friend’s wife. Larosee finally went to the police and filed a criminal report, a rape kit was performed. Larosee said that the police arrested her ex after reading her statement.
.
Larosee said she had particular hemorrhaging inside her throat. Her ex was charged with sex assault, battery by strangulation to commit sex assault, and Domestic battery by strangulation.
.
Larosee testified for almost 3 hours in a preliminary hearing in Criminal District Court. The prosecution added first-degree kidnapping.
.
Her ex-husband took an Alford plea deal and pleaded guilty to:
An Alford plea in Nevada is when a defendant in a criminal case does not admit guilt but concedes there is sufficient evidence to find him/her guilty at trial. In short, it is a guilty plea that allows the defendant to maintain his/her innocence.
.
The original Clark County Family Court Judge on the case was Linda Marquis, gave Larosee an emergency Temporary Protection Order (TPO) and sole physical custody. Everything was moving in the right direction until Family Court Judge Bryce Duckworth was reassigned to her case.
.
January of this year Austin got out of jail. Austin has not seen his kids since Dec 20218 when assaulted Larosee.
The ex-husband got out of jail and took Larosee to court for custody and visitation. Clark County Family Court Bryce Duckworth decided to retract the last judges’ decision and gave the felon unsupervised overnight visits every other weekend from Thursday thru Sunday after he sees a counselor for four visits.
.
Larosee wants a psychological elevation done and supervised visitation for while before he gets unsupervised visitation. The judge did order that the first four visits between Austin and his kids take place at a physiologist’s office to reintroduce them. But after that he’s legally allowed unsupervised visits, according to the court order.
.
Ducksworth’s orders been overturned multiple times over the years by the NV Supreme Court. Judges cannot be recalled and have no term limits.
.
Donna’s House Central (DHC) is a Family and Child Treatment (FACT) Program sponsored by the 8th Judicial District Court-Family Division.
.
Family Court Advocate Steve Sanson said:
.
“Donna’s House Central provides supervised visitation and exchange services for custodial and non-custodial parents. Donna’s House Central provides a safe, neutral, and child-friendly environment for non-custodial parents to initiate, reunite, or continue in a relationship with their children. Visitation is provided in one-hour or two-hour blocks of time under the auspices of visitation supervisors. All activities are monitored, and reports are provided to the Court.”
.
A family court judge can take away your kids, your money, your home and your freedom all without a jury.
.