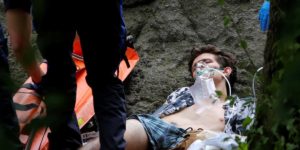 This morning New York Police are conducting a manhunt for the person who set off a bomb in Central Park, injuring one man. According to the NYFD the man lost his leg. The bomb exploded at the corner of 68th street and 5th Ave.

According to one witness “Outside Eli Wiesel’s funeral I heard a huge explosion just now. Running into Central Park and found a young man with his left leg blown off.”

No word yet on who has claimed responsibility for the bomb blast.

NEWSMAXTV LAS VEGAS is following this story and will update you as any new information comes in.