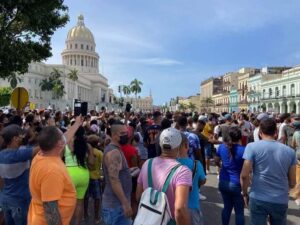 Cuban Americans are helping get the word off the Island as thousand take to the streets demanding their freedom from the failed Communist Government that has held on to power through murder and torture for the last 60 plus years.

“The demonstration takes place in Havana, San Antonio de los Baños and in Palmas Soriano, where the authorities cut the Internet signal to prevent people from continuing to broadcast the protest.

Thousands of Cubans took to the streets this Sunday to protest against the Castro dictatorship in the midst of the serious health situation that the island is experiencing. The demonstrations began in the town of San Antonio de los Baños (Artemisa, west) shouting “down with the dictatorship!”, “Freedom” and “homeland and life”, but then spread to other parts of the country such as Palmas Soriano (Santiago de Cuba), Havana, and Guira de Melena and Alquízar, both from the province of Artemisa . 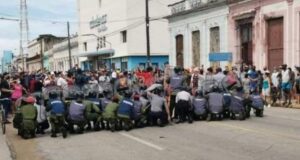 The unprecedented demonstration, which at this time continues to be joined by people, was broadcast live by Facebook users and takes place in the midst of a serious economic and health crisis in the Caribbean country , where there is a worrying lack of food, medicine and other commodities.

The broadcast lasted about 50 minutes and was suddenly interrupted. In the images, several protesters can be heard saying that the people “are tired”, while several security agents of the regime watch the protest.

The portal 14ymedio reported that the authorities cut the Internet connection in San Antonio de los Baños, to prevent the protesters from continuing to broadcast what happened. “There is no access to anything but people found out very quickly and right now they are trying to get to the place of the protest,” explained a resident to that outlet.

“Here we have suffered a lot, not only the confinement but also the blackouts, practically every day they remove the electricity. The police have real harassment on vendors and there is practically no way to make a living. This was a time bomb long ago, ”added Carmen, a retired downtown San Antonio resident

The North American senator Marco Rubio , a staunch critic of dictatorships such as those of Cuba, Venezuela and Nicaragua, also spoke on his social networks : “Spontaneous street protests erupt in several cities of Cuba at this time with songs of #NoTenemosMiedo (.. .) Frustration with the incompetence, greed and repression of the dictatorship is increasing rapidly ”. 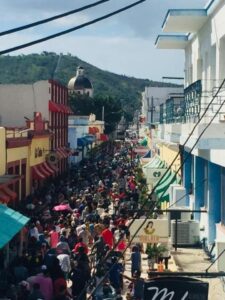