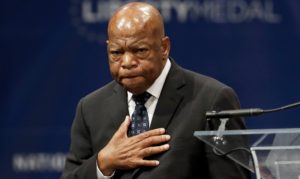 Congressman John Lewis this week attacked President-Elect Trump as an illegitimate President based on rumors Russia hacked Hillary Clinton and the DNC’s emails during the election exposing their corruption, which was the real crime. Congressman John Lewis was elected to Congress from Atlanta Georgia in 1987. This year will mark his 30th year in Congress. Lewis has been re elected to Congress over and over again because he was one of the early civil rights pioneers from the 1960’s in the South, suffering repression and violent discrimination. But his failed record in Congress of helping his district is told not just the dismal numbers, but through the countless stories of the lives lost to crime and poverty in Atlanta Georgia.

Atlanta Georgia, especially Lewis’s 5th Congressional District, according to Forbes, is the 6th most violent city in America. There are over 1,433 violent crimes for every 100,000 residents. As reported in the Atlantic Journal-Constitution, Atlanta has a murder rate of 20.2 per 100,000 civilians and 94 total murders in 2015, a list based on FBI data, compiled by economic analysis site 24/7 Wall Street.” That’s worse than Sub Saharan Africa.

The unemployment rate for African Americans in Atlanta is 22%. 80% of Atlanta’s African-American children live in communities with high concentrations of poverty, compared with 6% of their white peers and 29% of Asians. 82.1% of Atlanta blacks lives below the poverty line according to city statistics.

By all measures Mr. Lewis has failed to help raise his community out of poverty, failed to stop the violent crime, failed to bring jobs to his district and failed to improve the lives of children. But Lewis has continued to play the race card in Congress, even falsely claiming Andrew Breitbart called him the “N” word at a rally which was proved a lie with video recordings. He continues to get re elected based on his brave actions in the 1960’s civil rights movement while the liberal media gives Lewis a pass on his performance in office in this century. But by all means Mr. Lewis, continue attacking Donald Trump who is already on track to create more US jobs since his victory in the election than Lewis has created in Georgia’s 5th Congressional District in the last 30 years.