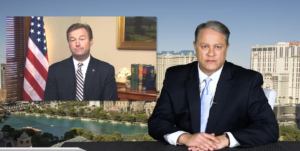 Do nothing carrier politician Dean Heller, who’s been in elected office in Nevada for the past 20 plus years with no real record of accomplishment, just announced a slew of new VA bills, oh by the way he also announced 2 weeks ago he’s running for reelection to the US Senate from Nevada.

But Dean Heller has an “F” rating for his voting record in Congress for the past 4 years from every conservative watchdog group in Washington D.C. Heller voted over half the time with Senator Reid. He supported Sandoval’s tax increase, open borders and sanctuary cities. And of course Heller publicly opposed Donald Trump, even after he won the Nevada caucus by a historic landslide.

According to a recent poll NEWSMAXTV LAS VEGAS conducted, our readers voted 10 to 1 against supporting Heller in 2018. They want a real conservative to run against Heller in the primary.

Even though Mr. Heller proposed some VA reforms around the edges this week, according to US Army Veteran Rob Lauer, “Heller has refused to support giving Veterans a real choice to opt out of the VA system. I just want the right to leave the VA and go on the Federal Employee Health System, the same system Heller and VA employees use, which by the way, cost 33%  less to run, with 100% better outcomes. US Military Veterans deserve at least as good healthcare as Congressman and Senators right Mr. Heller?”

Mr. Heller never served in the US military, but he did stay at a Holiday Inn.