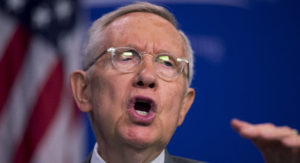 In response to Trump’s call on Russia to release the some 30,000 emails Hillary claimed were lost and failed to turn over to the FBI investigation and which she claimed were private emails regarding her yoga classes, the entire DNC and liberal media are going crazy including our very own Senator Harry Reid.

Senator Harry Reid told the Huffington Post Wednesday “How would the CIA and the other intelligence agencies brief this guy? How could they do that? I would suggest to the intelligence agencies, if you’re forced to brief this guy, don’t tell him anything, just fake it, because this man is dangerous. Fake it, pretend you’re doing a briefing, but you can’t give the guy any information.”

There was no response from the Senator on whether Hillary should be trusted with Intel briefings after her failure to maintain some 20,000 emails secure on an illegal homebase serve used by her while she was Secretary of State. In fact, there was a bill in Congress to strip Hillary of her security clearance.