AFTER 30 YEARS IN THE U.S. SENATE ONLY 2 ACTUAL CITIZENS CAME OUT TO SUPPORT HARRY REID AIRPORT NAME CHANGE 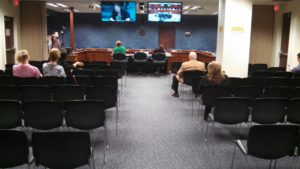 Back on March 17, 2017, the Nevada Legislature tried to pass a bill to change McCarran Airport to Harry Reid Airport. The legislature run by Democrats at the time, held an open meeting inviting folks to come speak out.

Nevada illegal alien, Astrid Silva, who gave the Democratic Response to President Trump’s Speech before Congress last month, also spoke out in support of the name change for Harry Reid.

UNLV college professor Greene called Pat McCarran anti-Semitic and his reasons why, all hearsay from third parties who are dead.

Clearly there was very little public support for the name change but 360 will continue to follow the story and the legislation. The bill died after that hearing.