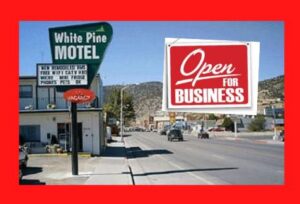 “WHEREAS, the Governor of the State of Nevada has exceeded his constitutional authority beyond the
scope of his standard powers and any additional powers conferred upon him during a declared “state of
emergency” without meaningful input from rural Nevada and without regard to the economic impact on rural
Nevadans, resulting in contravention of rural Nevadans’ right to life, liberty and the pursuit of happiness;
NOW, THEREFORE, THE BOARD OF COUNTY COMMISSIONERS OF WHITE PINE
COUNTY, STATE OF NEVADA, hereby resolves:
THAT IT DECLARES AN ECONOMIC STATE OF EMERGENCY”

But this is the best part:

“That due to the additional risk of exposure to COVID-19 caused by routinely visiting noncompliant
businesses in more densely-populated parts of the State, government officials and agents from agencies
outside White Pine County shall, with the exception of routine health and safety inspections authorized
by Title 40 of the Nevada Revised Statutes, be required to quarantine for 14 days prior to conducting
official business within businesses in White Pine County. Failure to follow local regulations may result
in local prosecution.”

The County Commission went further establishing a fund of $50,000 to reimburse any business fined by State Agencies.

“That in an effort to combat economic damage resulting from enforcement of the Governor’s “emergency
directives,” the Board of County Commissioners hereby establishes an “Economic Relief Fund” for
business who have incurred Governor-emergency-directive-related expenses in the form of fines,
penalties, or legal fees. The Fund shall be created from the County’s General Fund in the amount of
$50,000″

No word from Gov. Sisolak about Whine Pine County’s declaration.