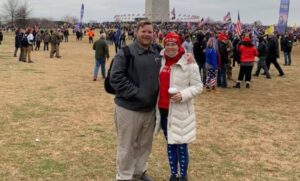 Jan 10, 2020
“Assemblywoman Elect” Annie Black
Resign? Here’s My Answer…
(Annie Black) – WARNING: There is extreme profanity included in this AnnieGram. I apologize in advance, but think it’s important to reprint the authors’ words verbatim so you can see just how deranged and unhinged these people are.
If such language offends you, please stop reading when you get to the second warning below. Otherwise…
As chronicled in Friday’s AnnieGram, I flew to Washington, DC to attend Wednesday’s “Stop the Steal” rally that was marred by some fringe elements who assaulted police officers and damaged property. Read the whole story here

https://electannieblack.com/how-my-trip-to-dc-didnt-go…/
.
THEY should be punished. Severely. Not those of us who simply exercised our constitutional right to peaceably assemble and “petition the government for a redress of grievances” related to how the 2020 elections were conducted.
To be absolutely clear: I wasn’t part of the march down Pennsylvania Avenue, never entered the Capitol and didn’t cross the barricades. In fact, this post has a shot from where I was standing as people started climbing the steps.
But that doesn’t matter to the unhinged left bent on “cancelling” anyone with an opinion different from theirs. So naturally, calls rang out on Thursday demanding that I resign as your representative in the Nevada State Assembly.
For example, the Democratic Legislative Campaign Committee issued a demand “for every Republican legislator involved in the insurrection to resign immediately.” To read their demand click here

https://www.dlcc.org/…/new-least-13-republican-state…
.
Chimed in Karl Catarata, a City of Las Vegas employee who works for Democrat Councilman Brian Knudsen…
“‪@RealAnnieBlack literally aided and
abetted criminals. Any legislator
near her should call for her resignation and
or expulsion. Simple.”
.
I don’t think there’s a more eloquent way to respond than to quote U.S. Army Brigadier General Anthony McAuliffe when the Germans demanded his surrender on December 22, 1944 at the Battle of the Bulge in World War II…
“N U T S !”
.
For those who may not understand the slang, you’re not alone. Here’s how the Associated Press explained it at the time…
When the officer handed McAuliffe’s answer to the German officer waiting just outside the American perimeter of defense,
the latter asked: “Is your commander’s reply favorable? If it is, I am empowered to continue negotiations of terms.”
.
“My commander’s reply is ‘Nuts,’” the American responded. “What does that mean?” asked the German. “It means go
to hell,” replied the American. That the German understood. He saluted and marched off.
.
I’m not going anywhere. Though it appears Republican Assembly Minority Leader Robin Titus wishes otherwise.
She issued a statement on Friday – on the “Nevada Assembly Democratic Caucus” letterhead and co-signed with Democrat Assembly Speaker Jason Frierson – that I consider to be a not-so-veiled threat to kick me out of the Legislature.
I think she’s still mad that I chose not to join her caucus. You can read about that here

https://electannieblack.com/top-10-reasons-why-i-decided…/
.
If Ms. Titus and Mr. Frierson want to try not to seat a duly elected representative for lawfully exercising her constitutional rights simply because they don’t like what I stand for and believe…well, I’ll let THEM explain that to YOU.
But their joint statement was mild compared to what some Twitter trolls wrote – mostly anonymous; many from out of state – demanding my resignation.
.
I was called a “lying traitor,” a “disgrace to humanity,” “dangerous,” a “domestic terrorist,” a “murderer,” “un-American,” “disgusting,” a “seditionist,” a “conspirator,” “reprehensible,” a “treacherous blight,” and my personal favorite, “Insurrection Annie.”
.
And some guy named Charlie Cremer naturally went here…
“You run with Nazis, you are a Nazi.”
.
But even those paled in comparison to emails sent to me by some deranged lunatics… which contain EXTREME PROFANITY. You can read those in the full blog here

https://electannieblack.com/resign-heres-my-answer/
To wrap up, I want to thank certain members of the media who have handled reporting on this controversy professionally and objectively. Here are links to their stories…
.
David Charns | Channel 8 | Las Vegas
https://www.8newsnow.com/…/incoming-nevada…/
Jaclyn Schultz | FOX 5 | Las Vegas
https://www.fox5vegas.com/…/video_53f4be29-73a6-5c33…
Lauren Clark | Channel 3 | Las Vegas
https://news3lv.com/…/nevada-assemblywoman-elect-speaks…
Rory Appleton | Las Vegas Review-Journal
https://www.reviewjournal.com/…/democratic-group-calls…/
Sam Metz | Associated Press
https://apnews.com/…/joe-biden-donald-trump-elections…
Oh, and Kevin Wall of KMZQ 670 AM, who himself got slammed just for interviewing me by some goof hiding behind the Twitter handle “BuzzIzarownd”…
“Love the dumbaases you have on !!!! The
f**king dumber the better – when will
Adam Laxalt be on as he’s the dumbest !!!”
You can listen to my interview with Kevin, from Wednesday night, here

https://electannieblack.com/annie-on-the-air-interview…/
And I especially want to thank Nevada Republican Party Chairman Mike McDonald – who, many of you might remember, I ran against for party chair in 2019 in a rather spirited, sometimes heated, race – for issuing this statement of support…
“Assemblywoman Black had every right to assemble in our Nation’s Capital. She did not break the law, participate in damaging property, or incite violence. In fact, she very clearly condemned those who broke the law. It’s ridiculous to be asking for her resignation for simply exercising her First Amendment right.”
Just proves that political opponents need not become mortal enemies. Thank you for this, Mr. Chairman.
Lastly, one of the Twitter trolls wrote…
“Did the Nevada taxpayers pay for
@RealAnnieBlack to fly all the way to DC…?”
Once again, sorry to disappoint. I was there on my own time and my own dime.
Now, don’t we all have some football to get to?
Seditiously yours,

Annie
.
P.S. Those who broke into the Capitol, assaulted police officers and/or damaged property should be punished. However, I just found a video clip of Capitol Police Officers opening the door for protestors and standing aside to let them in. You can watch for yourself here

https://twitter.com/christi…/status/1347596278583197698…
While some protestors did unlawfully “storm” the Capitol, others appear to have been welcomed in with open arms.
P.P.S. This post has a photo of your “dangerous seditionist” with my fiancé in front of the Washington Monument on Wednesday morning.