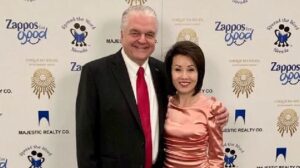 This week, we published a report about Kathy Sisolak’s (Gov. Sisolak’s wife) extensive list of clients made of dozens of Nevada governmental agencies she brags about on her Financial Advisory company website. A whistle-blower sent us a copy of a no bid contract between the Southern Nevada Water District and Kathy Sisolak’s company Hoggs, Ong and Associates, Inc.

Ong is Kathy Sisolak’s maiden name. The no bid contract which pays Sisolak $250,000 for financial consulting services was approved on July 15, 2021 by the Southern Nevada Water Authority Board which is made up almost entirely of Clark County Democrats. The contract disclosure attached below does not mention Ong is actually Mrs. Sisolak anywhere. Let’s be clear, money going to Kathy Sisolak is money going to Steve Sisolak.

The timing of the contract also raising questions about whether the no bid contract given to his wife for $250K was connected to Gov. Sisolak signing a law pushed by agency banning lawns?

360 News spoke with Mayor John Lee’s folks about his NO vote. Lee who sits on the Southern Nevada Water Authority Board told us how his plumbing company contract was dumped by the State after he was elected to the Nevada Assembly because he was told it was a conflict of interest. So Lee told us this contract also violates ethics laws. 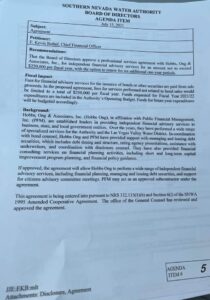