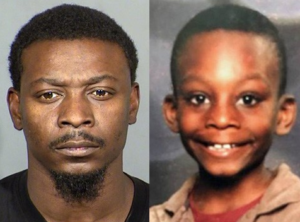 This week Paul Jones, father of Aaron Jones, 13, was booked for murdering his son after his remains were found on Tuesday in a vacant lot off Boulder High behind the Siegel Suites where the family of 15 were staying. Allegedly, Paul jones, admitted to killing the child when he slapped him and the boy hit his head on the floor. But the Clark County Coroner has not released official findings yet.

But the real issue is how and why did Paul Jones, with 11 kids at home already, on probation after pleading guilty record for child abuse one year earlier, get custody of Aaron Jones? Just two days ago, 360Daily.net reported an ethics complaint was filed against sitting Family Court Judge Moss who had forced 2 children to spend time with their violent, drunk father against their wishes. They expressed real fear of their father after he beat up his girlfriend in a drunken rage in front of them.

Next in the case Judge Moss oversaw, police cleared the blockade and called the children’s mother. The mother picked up the children and obtained a court order granting her physical custody of the children with the father only having supervised visitations.  The father was ordered to take multiple classes and counseling. When the father completed the classes and counseling, he proclaimed that he was a changed man. Since the children declined to participate in the reunification therapy, the father apparently used the emergent know-how of the father’s rights movement and claimed alienation.
/
Furthermore, the judge appointed new experts.  At the subsequent hearing, the mother’s lawyer insisted that forcing reunification therapy could be a potential disaster, and presented evidence of father’s reckless behavior. For example, he was arrested for DUI.  Also, the father’s girlfriend, the same one from the neighborhood party incident, testified that she did not notice any positive changes. In fact, the girlfriend was forced to obtain Temporary Protective Orders against him because she was fearful for her own safety and the safety of her son from another relationship.

Back to Paul Jones, who pled guilty in 2015 to Child abuse, neglect or endangerment and was sentenced to probation and anger management.

Metro records show Jones allegedly hit his step daughter, 14, and son,3, with a cable cord. The step daughter reported the abuse to a school counselor and said Jones was “mean and physically abuses her and her siblings.” as reported in the news.

The mother, Dijonay Thomas, lost custody to Jones who was awarded Aaron Jones and his sister just one year later in June 2016 despite still on probation following his guilty plea and with 11 kids already living in his home.
/
And on January 18, 2017, Jones had violated his probation and a bench warrant was issued. Keep in mind this was one month after the police put out a missing child notice regarding Aaron Jones. Jones was taken into custody on April 1, 2017 and has been in jail ever since.
/ 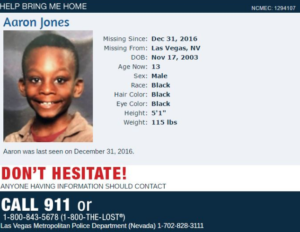 One day before Aaron’s body was found, on April 24, 2017 Jones’ parole was revoked and he was sentenced to 364 days in jail with 55 days credit. But it appears no one from either Metro Police or Child Protective Services went to Jones’ home check on the 13 kids living there with a father who was arrested again for violating probation for child abuse.

QUESTIONS THAT MUST ANSWERED

HOW LONG HAD AARON BEEN MISSING WHEN HIS PICTURE WAS POSTED BY THE NATIONAL CENTER FOR MISSING AND EXPLOITED CHILDREN?

WHY DID THE FAMILY COURT GIVE PAUL JONES CUSTODY WHILE ON PROBATION FOR A CHILD AB– USE CRIMINAL CONVICTION LESS THAN A YEAR EARLIER?

WHY DID HE FAMILY COURT GIVE PAUL JONES CUSTODY OF AARON WITHOUT INVESTIGATING THE 11 KIDS HE ALREADY HAD IN HIS HOME?

WHY DID THE FAMILY COURT ALLOW THE 13 KIDS TO REMAIN IN PAUL JONES’ CUSTODY FOR 3 MONTHS AFTER THE BENCH WARRANT WAS ISSUED FOR VIOLATING HIS PAROLE?

HOW MUCH TIME AND EFFORT WAS EXPENDED SEARCHING FOR AARON BY THE POLICE AND CPS?

Clips in this story are directly from Justice Court Dockets