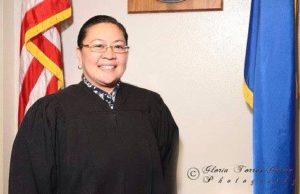 Today, local US Marine Veteran and activist Steve Sanson, filed an ethics complaint against Family Court Judge Cheryl Moss. What makes this news worth, besides the outrageous behavior outlined in the complaint, is this is the first complaint filed following the Nevada State Supreme Court’s decision in which the Court decided judges cannot be recalled. So this is first real test of the new found powers and the public’s focus on the work of this state organization.

In the decision, the Nevada Supreme Court ruled in Ramsey v. City of N. Las Vegas, that elected Judges are not subject to being recalled as spelled out in the State Constitution. The majority for the Court said, in their ruling, when the voters and State Legislature voted to create the Nevada State Commission on Judicial Discipline that superseded or wiped out the voters’ right to recall elected Judges.

With over 561 complaints filed against sitting Judges over the past three years, the Commission only publicly reprimanded 2 Judges in 2014, ZERO actions taken against Judges in 2015 and 1 Judge, (Judge Ramsey) barred from running for reelection in 2016.

Listed Items in the Complaint

Steve Sanson expanded on the items in his complaint with this explanation:

The following year, the father got wasted at the neighborhood party and abused his kids and a new girlfriend. When the girlfriend was trying to hide and call for help,  the father then barricaded the house, broke her phone, and tried preventing her from calling the police.  The children witnessed the entire catastrophe.
/
Next, police cleared the blockade and called the children’s mother. The mother picked up the children and obtained a court order granting her physical custody of the children with the father only having supervised visitations.  The father was ordered to take multiple classes and counseling. When the father completed the classes and counseling, he proclaimed that he was a changed man. Since the children declined to participate in the reunification therapy, the father apparently used the emergent know-how of the father’s rights movement and claimed alienation.
/
Furthermore, the judge appointed new experts.  At the subsequent hearing, the mother’s lawyer insisted that forcing reunification therapy could be a potential disaster, and presented evidence of father’s reckless behavior. For example, he was arrested for DUI.  Also, the father’s girlfriend, the same one from the neighborhood party incident, testified that she did not notice any positive changes. In fact, the girlfriend was forced to obtain Temporary Protective Orders against him because she was fearful for her own safety and the safety of her son from another relationship.
/
First, Judge Moss delegated her job to a squadron of pricey shrinks and the father’s lawyer.
/
Second, the judge further changed custody of the children from mother to abusive father de facto, “for reunification purposes” without “technically” changing it. Since the judge adopted the reunification plan, the mother was essentially diagnosed with “pathogenic parenting” without any legitimate basis. Since the judge adopted the plan as an order, also eliminated judicial review process and precluded the mother from examining a “witness against her”.
/
Third, not only had judge delegated her judicial authority to the therapist and granted the therapist the right to grant unsupervised visitations to the father, but the therapist in turn delegated this authority to the father: “[Dad] will rate the children’s behavior each day using the behavior rating scale provided by [therapist]…If symptoms are still present [,] supervised visits will not begin [with the mother.]” Therefore, it would be to father could simply say that the children are not responding well, and they would never, by the therapist’s recommendation, be returned to their mother, and custody would be changed forever without any right of the mother to have access to the children or even “confront the witness against her.”
/
Forth, Judge Moss allowed ex parte communication from the therapist, and condoned exclusion of mother’s counsel from all communications. In fact, Moss even made orders not to require review of the orders by mother’s lawyer.  When the children refused to go to father, the therapist wrote an e-mail to court giving directions to the judge. The therapist requested emergency pick up order, and explained that compliance with the court orders is not the child’s choice. The therapist also wrote that if a parent is unable to ensure that their child is compliant with court orders “then this parent is considered unfit.” The e-mail was sent to everyone except mother’s lawyer.
/
Fifth, Judge Moss summarily found mother in criminal contempt of an order that did not exist, and levied sanctions without a hearing.
Finally, Moss made the proceedings inexpensive for the father.  She gave a signed order to the father’s attorney with a blank space for him to fill out, essentially giving him carte blanche freedom to fill in empty space in and get attorney’s fees that he wanted “ordered”.
/
360Daily.net did reach out to Judge Moss and the Nevada State Commission on Judicial Discipline for comment but haven’t heard back. We will update this story if and when we receive any responses.
/ 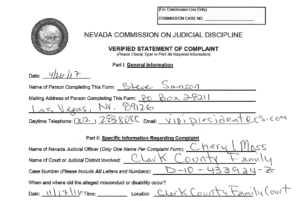