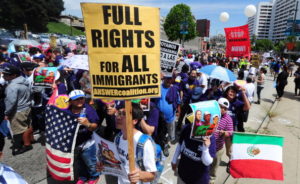 Tomorrow, May 1, 2017, several leftists and pro-sanctuary city groups have a planned march on the Las Vegas strip set to start at 5:30 p.m. on May Day, an annual worldwide communist celebration. According to their call for marchers, they will be demanding amnesty for illegal aliens here in the valley, $15 per hour minimum wage and other leftist demands.

Metro Police are expected to have a large presence after violence broke out across the nation at many leftist rallies since President Trump was inaugurated, including at Berkeley where police were ordered to stand down. According to Metro officers, protesters won’t be allowed to march with masks on, as they did in Washington D.C. on inauguration day that led to street violence, including a limo set on fire and a Starbuck attacked.

Many people noticed the color red is the theme of this year’s march as shown in the notice shown in this article above that went out to protesters.

The leftist organizers are warning Pro-Trump Republicans online to stay away in order not to provoke violence.

THE ORGANIZERS’ OFFICIAL NOTICE OF THE MARCH IN RED 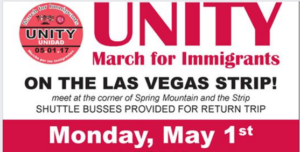 The Culinary Union and the May Day March Coalition plans march

WHAT: UNITY March for Immigrants