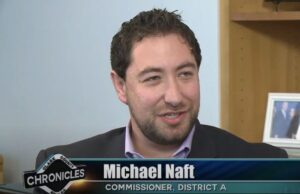 Clark County Commissioner Michael Naft is accused of not living at the house he listed on his candidate form under penalty of perjury. According to a complaint filed with Nevada SOS Barbara Cegasvke’s office, Neft failed to meet the residency requirements to be appointed in District A in January 2019.

The complaint outlines how Naft, while working for Congresswoman Dina Titus, was registered to vote at his listed address at 3726 South Las Vegas Blvd. Unit 905W. That address is not in Clark County Commission District A.

State law NRS 291.1755 mandates that no person may be a candidate or appointed for any office unless they live there for at least 30 days immediately preceding the date of the closing of filing.

On January 23, 2019, after having been appointed to Clark County District A, Michael Naft filed his Nevada Financial Disclosure Statement showing his address as 3020 Via Della Amore Henderson and said that he had lived at that address for one year. But Naft only closed escrow at that address on December 21, 2018 and was appointed to serve in District A on January 8, 2019. That’s only 19 days before his appointment to the Clark County Commission for District A.

The complaint was filed with Cegasvke’s office on May 18, 2020, and just like the other 3 complaints against Democrats this election, she ignored them. RINO BARBARA CEGAVSKE REFUSED TO INVESTIGATE. 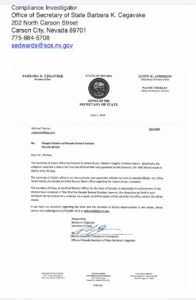 Naft is running against challenger Mike Thomas, who unfortunately ran out of time and money to properly fight his claim.