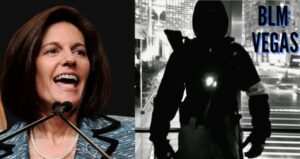 Catherine Cortez Masto, U.S. Senator from Nevada, is backtracking on her support for the far-left group Battle Born Progress as she tries to win over Nevada voters in the midst of a historic crime wave in Las Vegas. BTW, it’s ironic that Battle Born Progress is the leading Nevada advocate for killing unborn babies.

American exceptionalism often inhibits us from looking at what other countries are doing right. Many countries have a mostly unarmed police force. These countries have significantly fewer officer-involved shootings. It's time to act on police violence https://t.co/YQ0t7nVmP6 pic.twitter.com/2KRvDzs86Q

“BBP has called to disarm police and “save money by defunding” the state’s police presence in schools. It has also said the pro-police phrase “Blue Lives Matter” is “a reactionary, racist response to #BlackLivesMatter that attempts to trivialize and distract from police killings of Black people.” 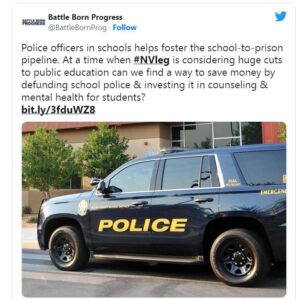 As late as November 10, 2021, Cortez Masto fully embraced and did events with Battle Born Progress (BBP), a far left group.

“I want to thank Battle Born Progress for hosting this forum” 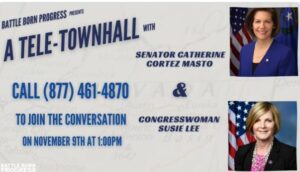 Even Cortez Masto’s staff are defund the police movement supporters, like staffer Austin Dean, who donated money to a radical BLM group that bail out convicted rapists and murderers. Dean still works for Cortez MAsto even after reports of his donations and support for radical groups were reported.

Dean supported the Minnesota Freedom Fund (MFF), which paid the bail for protesters who were arrested during the BLM George Floyd riots. The group was promoted at the time by Sen. Kamala Harris. Donations went to bailing out a convicted rapist who raped a woman just weeks after his release. He was later convicted and sentenced to 25 to 30 years in prison, according to reports. Another man bailed out by MFF allegedly murdered an old nemesis with whom he had a “beef” just three weeks after they bailed him out.

“Being that Senator Cortez Masto was a speaker at a Battle Born Progress event who has supported defunding police, maybe she is not as pro-police as she claims to be.” 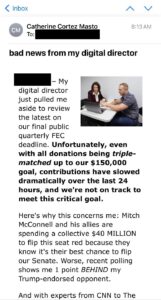 According to a poll from the progressive think thank Data for Progress released on Thursday, Laxalt leads Cortez Masto by 1 point.