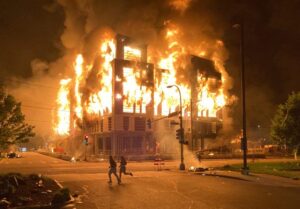 The local Dem News had “political experts” on TV today telling the audience to expect a Red Wave Election tomorrow night, but also expect to see that victory slowly eroded by mail-in-ballots over the course of the week. That’s code for how they plan to steal the election right in front of our eyes.

The fake polls showing Biden ahead is meant to give Dems cover when they claim victory in a week.

States like California, Nevada, Colorado and Oregon may try to outright resist a Trump Victory. Antifa and BLM will take to the streets and burn cities. The Dem media will declare President Trump illegitimate. The deep state players in the Federal government will side with the deep state against Pres. Trump.

The other part of this chaos rests on House and Senate results. If Republicans lose the Senate and the House then expect another effort to impeach Pres. Trump right away.

CV19 isn’t going away any time soon. Dems are not going to give up this new found power to control their populations. More lock downs are certainly coming.