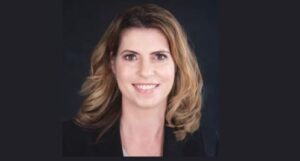 As a none lawyer, it’s rare to have the opportunity to observe judicial candidates in action on the bench prior to an election. But that’s exactly what happened earlier this year when I was forced to sue an insurance company in a car accident. It was there when I first observed lawyer and Judge Pro tem, Veronica Barisich, who adjudicate my case.

This was just another a small claims case, but it was my case and it matter a great deal to me. Veronica Barisich took the time to hear both sides, allowed witnesses and reviewed all the evidence presented. But what really struck me about Veronica’s handling of my small claims case was the time she took to actually write a fully thought out decision. I’ve never seen a small claims judge write a decision. Not to mention that her written decision followed the NRS, followed the facts and followed the case law.

Since then, I’ve had further opportunities to speak with Veronica about her judicial views about individual rights and Constitutional law and I am confident she will protect the people of Nevada from over reach and abuses of our liberties.

Veronica is a wife, a mother of 3 boys and a practicing lawyer for over 16 years with extensive litigation experience. Veronica is highly educated, professional and extremely qualified to sit on the bench.

For all these reasons, I fully support and endorse Veronica Barisich for District Court Judge Dept. 5. 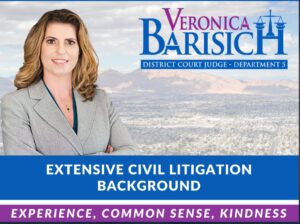