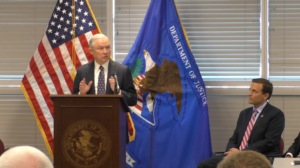 Law Enforcement from North Las Vegas, Boulder City and all over Clark County attended the meeting. But Sheriff Lombardo was not present. He did send his inter governmental agency representative and Deputy Chief Riley from The Detention Center. Both were gentlemen and true professionals.

Sessions told the audience of law enforcement professionals and media:

“Unfortunately, this cooperation has been impeded by the policies of some cities and states. Some 300 jurisdictions in this country refuse to cooperate with federal immigration authorities regarding illegal aliens who commit crimes — even MS-13 gang members. These jurisdictions are protecting criminals rather than their law-abiding residents.”

“The Department of Justice will not concede a single block or street corner in the United States to lawlessness or crime. We will work to strengthen our partnerships with you—law enforcement on the front lines. You are ultimately the most effective resources that we as a country have in this effort.”

Sessions said he will review claims by Lombardo’s office that his office now complying and wants off the ICE detainer violator list. No word though on whether Session will release some $975,000 in federal grant funds awarded to Clark County for the gang unit. Lombardo is running for re-election next year.

Sen. Heller recently attacked Jacky Rosen for her vote against cutting off federal funds to Sanctuary cities but he was a no show at the Las Vegas event today. In a recent poll only 5% of Nevada thought Heller was doing a good job.

On April 21, 2017 U.S. Attorney General Jeff Sessions issued a cease and desist letter to eight jurisdictions nationwide including Las Vegas to stop Sanctuary City Policies or face losing federal grant money. In the letter Session demands Metro Police prove they are in compliance or risk losing federal money. Lombardo has until June 30, 2017 to comply or lose over $6 million in federal grant money according to Session’s letter. 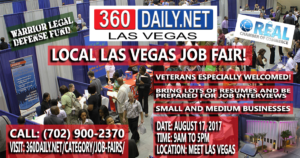