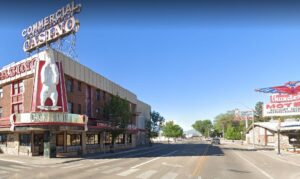 Less than a month ago, White Pine County was the first county to pass a resolution voiding Sisolak’s CV19 rules. Gilbert told 360 News “White Pine County has been open almost 8 weeks now and no mass death, so they ALL have their test case 4000 people and no problems”

On January 6, 2021, the Elko County Board approved a resolution

WHEREAS, our Founding Fathers recognized the abuses inherent with a totalitarian
government and drafted two of the most sacred documents of all time – the Declaration of
Independence and U.S. Constitution – to limit the government’s power and to clearly define and
protect the God given rights we Americans enjoy; and
WHEREAS, we as Elko County Commissioners have sworn to “support, protect and defend”
that Constitution; and

WHEREAS, Nevada Governor Steve Sisolak has sworn exactly the same oath; and

WHEREAS, Nevada Governor Steve Sisolak’s order limiting the capacity of churches and the
sizes of our family gatherings violates our First Amendment rights to the free exercise of our
religions and our right to “peaceably assemble;” and

WHEREAS, Nevada Governor Steve Sisolak’s order that our businesses be restricted to 25%
capacity violates our Fifth Amendment right that declares no citizen shall be deprived of his
property, “without the due process of law;” and

WHEREAS, the Fourteenth Amendment of the U.S. Constitution says, “No State shall make or
enforce any law which shall abridge the privileges or immunities of citizens of the United
States;” and

WHEREAS, it has been recognized throughout our history that our Constitutional rights will
only be good for as long as we stand up for them; and

WHEREAS, U.S. Attorney General William Barr publicly stated last summer that there is no
pandemic exception to our Constitutional Rights; and

WHEREAS, Nevada Governor Sisolak is usurping the role of the Nevada Legislature by
creating law with his directives and claiming the right to do so under the authority of “emergency
powers” even though the pandemic has been with us for nearly a year and the legislature has met
twice; and
Resolution 2021-01
Page 2

WHEREAS, initial “expert” predictions were that the COVID case fatality rate would be three
to five percent and the actual fatality rate is less than one half of one percent; and

WHEREAS, Nevada Governor Steve Sisolak’s initial directives were intended to “flatten the
curve” and prevent Nevada’s hospitals and other health care facilities from being overwhelmed;
and

WHEREAS, Nevada Governor Steve Sisolak’s directives have had no effect on slowing the
virus; and

WHEREAS, Elko County’s health care facilities, including Northern Nevada Regional Hospital,
have not been and are not now near full capacity; and

WHEREAS, Nevada Governor Steve Sisolak has singled out bars and restaurants for closures
when studies have shown only 1.4% of COVID-19 infections have been traced to those sources;
and

WHEREAS, Elko County is being punished by the Governor’s directives when more than 42%
of the COVID-19 deaths here have occurred in the skilled nursing facility under the authority of
the state; and

WHEREAS, lockdowns have proven to be ineffective in slowing the virus as witnessed by the
experiences within our local extended care facility and county jail, as well as data coming out of
California; and

WHEREAS, the Great Barrington Declaration issued by infectious disease epidemiologists and
public health scientists and co-signed by more than 52,000 medical professionals states, “Current
lockdown policies are producing devastating effects on short and long-term public health” and
“Keeping these measures in place … will cause irreparable damage;” and

WHEREAS, the wisdom of the Great Barrington Declaration is being borne out with the
exploding crime rates, more mental health issues, fewer cancer screenings and worsening
outcomes from other medical conditions across the nation.

NOW THEREFORE BE IT RESOLVED, that the Elko County Commission concludes that
Nevada Gov. Steve Sisolak has failed to uphold his solemn pledge to “support, protect and
defend” the U.S. Constitution and urges him to correct his course by removing his orders
restricting our local businesses and limiting the size of peaceful gatherings; and

BE IT FURTHER RESOLVED, that the Elko County Commission request that Gov. Sisolak
provide scientific evidence that his directives have a direct and significant impact on reducing
the spread of Covid-19 in the community that justifies the reduction of business and/or the shut
downs in the community.
Resolution 2021-01

Page 3
BE IT FURTHER RESOLVED that Elko County Commission considers all its independently
owned businesses essential and urges the governor to treat them the same as the big name
retailers; and

BE IT FURTHER RESOLVED that Elko County Commission demands that the Governor
remove the current restrictions before one more business is lost for every business lost is jobs
lost and a loss to the tax base of this State and County; and

BE IT FURTHER RESOLVED that Elko County Commission urges the Governor to direct his
OSHA inspectors to discontinue their abusive inspections and fines on our county businesses;
and

BE IT FURTHER RESOLVED that Elko County Commission urges our legislative
representatives to aggressively support amendments to Nevada Revised Statutes that would limit
any Governor’s authority to restrict our freedoms under the auspices of a declared emergency;
and

BE IT FURTHER RESOLVED that Elko County administrative and legal staffs shall research
litigation opportunities that the county, or multiple counties collaboratively, could pursue to
provide relief to our local businesses; and

BE IT FURTHER RESOLVED that Elko County administrative and legal staffs shall research
County ordinances for possible amendments supporting our local businesses and/or limiting
access by State enforcement agencies; and

BE IT FURTHER RESOLVED that Elko County administrative and legal staffs shall research
the possibility of using unspent and recently extended CARES Act funding in support of
businesses that have been or may be fined by State enforcement agencies; and

BE IT FURTHER RESOLVED that Elko County will consider opening and providing for the
management of a fund to be supported by individual donations in support of businesses that have
been or may be fined by State enforcement agencies; and

BE IF FURTHER RESOLVED that Elko County administrative and legal staffs will research
and develop a document that summarizes businesses’ rights and obligations when a State
enforcement agent approaches or enters that business; and

BE IF FURTHER RESOLVED that Elko County recognizes its right, as stated in our
Declaration of Independence, to confront the government when it has subjected its citizens to a
“long train of abuses and usurpations” and our solemn duty to “throw off such Government” if
those abuses are not corrected.