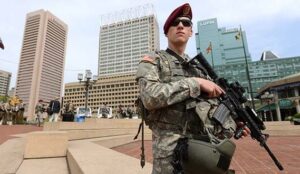 In less than one week, the corona-virus has triggered a freeze of all flights between Europe and the U.S., all flights between Asia and the U.S., shut down of all major league sporting events, conventions, schools, universities and any event with a crowd of more than 50 people in California. Italy has put their entire population on total lock down. The U.S. Capital is shut down until the end of the month at least. Even Disneyland parks are now shut down. President Trump is on the verge of declaring a national emergency which gives the government absolute power to lock down the entire country, for public health safety.

BTW The President was exposed to the coronavirus over the weekend.

The U.S. appears to be headed towards a total shut down of the economy. Will restaurants be next? Who’s handling your food? Grocery stores are full of folks and poss a threat to public health? If there’s a big uptick in the number of cases over the next week what’s next? What happens to the U.S. Primary elections? No Democrat National Convention?

China has already locked down most of the country allowing one family member to go shopping once a week for food, only on approved designated days. Will the American people accept a full lock-down of the country for the next several months until the disease burns out? So far the American people have complied with all government orders without question. Most people will comply if they get free cable TV and free pot and toilet paper.

Make no mistake about it, this will cause a major financial depression and trigger political unrest here in the U.S. and across the world, most of which will play out on Facebook since everyone will be locked down at home. The real danger is from ruthless national leaders who will take this opportunity to crush any opposition and reshape the political landscape under the cover of this crisis. The difference between lock-down and martial law all depends on who’s ordering the troops.