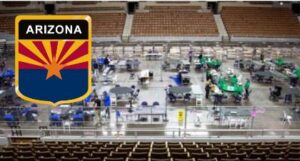 The case caused the 9th Circuit convulsions, first affirming the lower court rejection of the DNC lawsuit, then reversing itself and finding for the DNC, eventually landing in the U.S. Supreme Court.

But a broken clock is right twice a day and the U.S. Supreme Court ruled in favor of Arizona and found “Arizona’s out-of-precinct policy and HB 2023 do not violate §2 of the VRA, and HB 2023 was not enacted with a racially discriminatory
purpose. Pp. 12–37″.

This case may have broader implications as the Republican controlled Arizona Legislature is currently conducting an audit of the 2020 election and now has decided to ditch the dominion election system.

The Biden administration is now suing to stop the Arizona audit.

Nevada Republicans are calling for an audit of the 2020 elections as well.