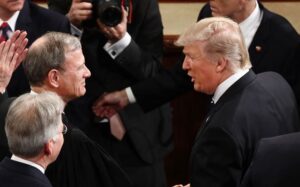 Democrat Socialists used CV19 as an excuse to take landlord rights away, even the Biden Administration’s CDC claimed powers over eviction moratoriums. And once again the U.S. Supreme Court ignored the law, the Constitution and basic human rights, ruling against any relief for the landlords.

Mind you, both Democrat and Republican Governors have claimed powers they don’t have, extending the eviction moratorium a dozen times at the end of each month right before it’s about to end. The government cannot take property without compensation. Landlords are forced to allow tenants to stay in their homes without paying rent, even from tenants receiving more money from unemployment. The crisis created by the Government that put millions out of work is the justification to destroy one group of people, landlords, (mostly Republicans) in favor of tenants. Landlords sued the government and finally got their case accepted by the Supreme Court only for them to say it’s too late. The crisis is over so we’re not going to rule on the Constitutional issues, the court declared.

The failure of the court to rule on the issue opens the door to future abuses. In addition, the landlords are denied compensation from the government for their constitutional and human rights abuses. Landlords, many of whom are seniors living on the rents from 1 or 2 homes after paying the mortgages, taxes, insurance and repairs, now must live with huge losses.

It’s clear the Roberts Court is ruled by fear of the Socialist Democrat, Antifa/BLM mobs and not the rule of law.

JUSTICE KAVANAUGH, concurring wrote:
I agree with the District Court and the applicants that the Centers for Disease Control and Prevention exceeded
its existing statutory authority by issuing a nationwide eviction moratorium. See Utility Air Regulatory Group v.
EPA, 573 U. S. 302, 324 (2014). Because the CDC plans to end the moratorium in only a few weeks, on July 31, and
because those few weeks will allow for additional and more orderly distribution of the congressionally appropriated
rental assistance funds, I vote at this time to deny the application to vacate the District Court’s stay of its order.