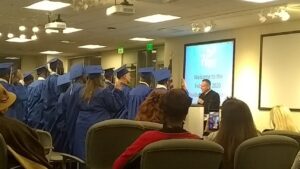 I’ve personally observed Judge Atkin over the past year on numerous occasions in court, as he patiently listened to all sides, asked straight forward questions and issued rulings based upon the the law and the specific issues presented to him by counsel. Judge Atkin knows the rules of court and the law. He actually follows the law unlike so many on the bench.

I’ve also observed Judge Atkin outside of court presiding over a Hope for Prisoners’ graduation ceremony where he showed grace and style.

Judge Atkin is respected by a wide range of people from across the political and societal spectrum throughout Clark County. He takes the time to read all the briefs, he’s fair to all sides and deserves to be reelected. For those reasons 360 News Las Vegas and I endorse Judge Atkin of Dept. 8 for reelection.