WHY DID MOST NV REPUBLICANS LOSE THIS CYCLE?

WHY DID MOST NV REPUBLICANS LOSE THIS CYCLE? 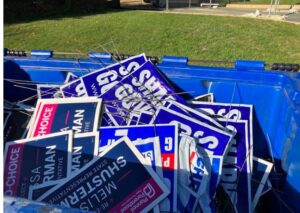 After-action reports are used by military leaders to review a battle and learn lessons about their forces and the enemy.That’s how winning is done. Be careful not to allow folks with their own political agendas to shape that after-action report.Moderate Republicans are blaming conservatives. Anti-Trump Republicans are blaming Trump and his endorsed candidates for losses. Some are blaming Michael McDonald and the state and county GOP leadership for failing to implement a ballot harvesting program in order to compete with Democrats who were in their zone this election. The NVGOP was the JV team up against the Dems who are the NFL. Dems work year round with paid staff to build, plot and plan. Dems don’t allow competitive primaries, which hurts Republicans greatly. Dems, while they have their own internal conflicts, are truly unified under the Harry Reid machine still. As time goes by, that machine is slowly coming apart. But it certainly helped push Dems ike Dina Titus and Susie Lee across the finish line. Some folks are blaming the message. However, because Democrats control the mainstream news media, social media, and Hollywood, Republicans have no way to get their message out except through paid television advertisements.I’ve heard moderate Republicans for years say, Repubs need to stop talking about abortion and focus on economic issues. And that’s exactly what Republicans did this cycle. And Dems did the exact opposite, and focused on abortion and ignored the economic disaster they created. Many folks believed the Dem’s TV ads that April Becker wanted to banned abortion even if the life of the woman was at stake. The lie worked. Because at the end of the day, elections are won by the side that agitates their base voters to turn out the best. Social issues win elections. Had Republicans run against the radical transgender agenda and promised to protect women’s sports and get it out of public schools, we would have crushed the Dems. The issue would have helped turn out the 100K plus Republicans who didn’t bother to vote in Nevada.Some folks are claiming we lost races because Democrats outraised us. Cortes Masto raised $68 million to Laxalt’s $18 million. Laxalt, on the other hand, was outspent three to one and lost.08 percent of the time.The NVGOP raised a whopping $218,000 this cycle, of which $210,000 came from Las Vegas businessman Robert T. Bigelow.We need professional political operatives working year-round to build our organization. An army takes years to build and train its forces, all for a battle that may take less than a week. The Allies took 3 years after the attack on Pearl Harbor to build up their forces prior to invading Normandy, which was won or lost in the first day of battle.The other major structural issue Republicans must address are the third party candidates that have cost us several elections. There needs to be a left wing third party to help us offset the Libertarian Party and Independent American Party, who have all but destroyed Marchant and other races. Marchant lost to Aguilar by 23K votes. Chuck “YOU” Muth’s endorsed candidate, Independent American Party nominee, Janine Hansen, along with the Libertarian candidate, pulled 26K votes away from Jim.

Governor-Elect Lombardo won because he had huge name ID worth $10 million after winning two consecutive elections in Clark County, his police department successfully solved the Jeff German murder showing him to be a competent administrator and being a cop helped him win the law and order issue over. And Sisolak’s complete failure to get the average non-political person unemployment money after shutting down their companies and calling them non essential turned them into Lombardo voters.

And this is why it is called Political Science, and why entire universities have professors studying every aspect of elections in order to draw lessons for the next election cycle, which begins in just a few months. I want to hear from YOU.

Why do you think we lost some elections and won others? Email us at [email protected]We may publish your response.