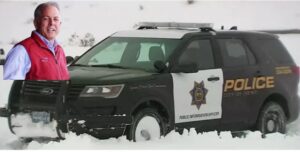 Sisolak failed to get unemployment checks out to folks he called non-essential for well over a year in many cases, and some are still waiting today. The governor’s role in dealing with emergencies is one of his key jobs. Newly minted Governor Lombardo faced his first tests dealing with severe winter weather causing power outages and natural gas storage in Northern Nevada. Here’s how Governor Lombardo dealt with it. He took immediate action.

CARSON CITY, NV –  Governor Joe Lombardo issued updates on the state’s call to action on the major weather incident that has impacted Nevada over the last several days.

“As we face more incoming severe winter weather, state agencies are working diligently on their preparation and response efforts. I encourage all Nevadans to prepare for the storm, listen to local weather advisories, and use sound judgment when traveling,” said Governor Joe Lombardo.

Ahead of tonight’s forecasted winter storms, the state is continuing with its preparation and response efforts, which include:

·         Assisting local jurisdictions with direct information from the National Weather Service (NWS) and NV Energy on current and potential impacts.

·         Holding of coordination calls with local government emergency managers to ensure local needs are met. The Division operates our state’s emergency management and homeland security enterprise under the premise of locally executed, state led, and federally supported: all disasters are local with the state assisting our local partners.

·         Dissemination of information to the media and public on the conditions and resources deployed.

·         Monitoring the county needs and prepared to support as needed.

·         NV Energy brought in crews from outside the area, including Las Vegas, Oregon, Northern California, and private contractors to assist in restoration. These crews and support personnel are working around the clock to restore power safely and as quickly as possible to customers in northern Nevada.

·         Drip faucets to reduce the likelihood of a frozen pipe rupture.

·         Keep a supply of flashlights and batteries on hand. Do not use candles as they pose a fire risk.

·         Have a supply of non-perishable foods, medicine, baby supplies and pet food, as well as one gallon of water per person per day.

·         Do not run a generator inside a home or garage. Use gas-powered generators in well-ventilated areas.

·         Consider all downed power lines as live and dangerous. If you see one, stay away and call 911 and NV Energy to report.

·         Those on wells without power will also be without water during the power outage and should prepare for water stores to drink and provide basic hygiene.

DEM is monitoring the upcoming storm and remains in close contact with all local and state agencies to monitor the forecast and will work to alert the public with important updates or notifications. Please visit: dem.nv.gov to learn what you should do before, during, and after a winter storm.

Recent storms, along with existing supply chain issues, have delayed the delivery of propane in Nevada. These widespread delivery delays have caused a drop in propane supply. Given ongoing severe weather conditions, it is critical that Nevadans have access to adequate propane supplies.

To immediately address the propane delivery emergency ahead of more severe winter weather, Governor Lombardo has facilitated a temporary suspension of motor carrier regulations. The suspension of these regulations will expedite the propane delivery process in Nevada and help support critical state infrastructure, while ensuring the health and safety of Nevadans amidst ongoing winter storms.