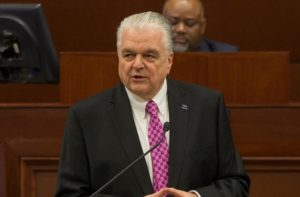 Most of the time campaign rhetoric turns out to be just that rhetoric. Newly sworn in Nevada Governor Steve Sisolak, who governed as a moderate Democrat on the Clark County Commission for the last decade, opposing tax increase and fighting firefighter over pay abuse, showed his true political character this week at his first State of the State Speech. Yes, Sisolak campaigned like a left winger, but thank God he is sticking to his true self in office.

Gov. Sisolak just said what every real Republican in Nevada has longed to hear from our state’s leadership, “no new taxes”. It’s ironic that so many of our own Republicans in Nevada continued throughout the 2018 election to defend Roberson’s tax increases. Gov. Sisolak just cooped the tax issue and the middle from Republicans. RINO Republicans seemed lost and confused by Sisolak now with no one to sell out to.

But Sisolak must hold off his own crazy left in order hold the middle ground. His own left wing wants free everything paid for by higher and higher taxes. So this week Republicans and Nevada tax payers can breathe easy and should support Sisolak by not raising taxes.

Republicans many not agree with every point in his speech, but Gov. Sisolak is showing what it means to govern as a true moderate Democrat.