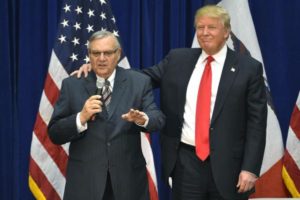 The Clark County GOP announced that Sheriff Joe Arpaio will be giving the keynote address at their annual convention this year May 5, 2018. The location has yet to be announced yet.

The Obama administration charged and convicted Joe Arpaio of contempt of court because his department continued to enforce immigration laws in the board town they patrol in violation of a federal court order. Last year President Trump pardoned Sheriff Arpaio sparking outrage on the left.

Antifa is highly anticipated to be protesting the event in May. Metro has not issued any statement about how much they will charge the Clark County GOP for a permit for the event.