Today, a Clark County Grand Jury indicted Tony Dane, Assemblyman Chris Edwards’ longtime friend and campaign consultant. Tony Dane is accused of wiretapping Edwards who, according to several of his Assembly colleagues, was soliciting bribes to pay off his approximate $50,000 campaign debt following the 2014 election in return for voting for John Hambrick for Speaker. Tony Dan is also charged with extorting Chris Edwards in connection with Edwards’ bribery scheme.

According to police and court records Chris Edwards was actively selling his vote for speaker. Governor Sandoval donated $5,000 to Edwards plus helped him raise him another $30,000 according to 4th quarter cycle contribution reports right before the vote for speaker.

The criminal trial is sure to be eventful with numerous Assemblymen as witnesses for both the prosecution and the defense. David Otto, Tony Dane’s attorney, said he is waiting to see the indictment before making any comments. 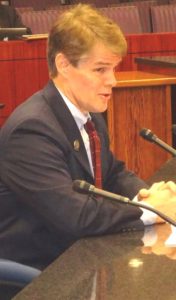 The timing of the Dane’s indictment right before early voting is set to start in a couple of days could hurt Chris Edwards as he fights for his political life against a well-organized challenger, Connie Foust in the Republican primary election. Connie Foust responded to the indictment of Edwards’ campaign consultant saying “Edwards came into our small community to run for office just a couple of years ago. Since then all we have seen in the news is one legal issue after another with him. And frankly many voters are tired of him. ”

The judge in the case issued a warrant for Dane and set bail at $42,000. His first appearance in court has not been set yet.