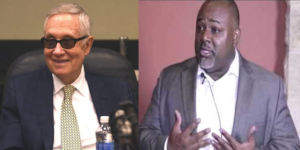 Carson City, Nevada Gaming Control Board Chairman A.G. Burnett secretly recorded Nevada Attorney General Adam Laxalt lobbying him to take action against a plaintiff in a lawsuit against Sands Corp. owned by super donor Sheldon Adelson. AG Laxalt is considered the top candidate currently on next year’s Republican ticket for Nevada Governor. So why would A.G. Burnett secretly record the NV Attorney General in the first place, many Nevada Republicans are asking?

According to Burnett, AG Laxalt wanted the Gaming Control Board to jump into a legal battle to help Sheldon Adelson. According to reports, Burnett took the recording to the FBI, but federal authorities found Laxalt committed no criminal wrongdoing. Now the Democrats are asking for an ethics probe in the State Assembly and to remove Laxalt with a special counsel at the NV Gaming Control Board due to Burnett’s recording. AG Laxalt denies wrongdoing. Laxalt said “his actions were part of the job of Attorney General. He said Democrats calling for the hearing are engaging in a partisan stunt.”

Gov. Sandoval has warned against any effort to impugn A.G. Burnett. But Burnett is the ultimate insider in Nevada State Government whose appointment by Sandoval was approved by Harry Reid. Nevada Gaming Control Board is arguably the most power commission in the state and its where Harry Reid got his political foothold (1977-1981). In fact, Shawn Reid sits on the board with A.G. Burnett today, both of whom were appointed by Gov. Sandoval.

Many Republicans are accusing Burnett and the Democrats of a political hit job. One Republican lawmaker in Carson City said, “Harry Reid’s fingerprints are all over this effort to discredit AG Laxalt.”

According to the AP

Democratic Assemblywoman Maggie Carlton has proposed a bill to give the gambling board independent legal counsel.

“The Legislature has an oversight responsibility to investigate and root out anything that undermines the integrity of the gaming industry — the core of Nevada’s economy,” she said.

The Legislature has the power to impeach Laxalt and other state elected officials and could remove him from office with a simple majority in the Assembly, which Democrats have, and a two-thirds vote in the Senate, of which Democrats are three votes shy.