UNLIKELY VOTERS WILL SWING THE ELECTION FOR TRUMP

UNLIKELY VOTERS WILL SWING THE ELECTION FOR TRUMP 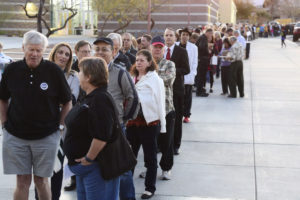 Today as more presidential polls keep coming out showing the race for President is neck and neck, including the most recent Real Clear Politics Poll showing Trump 4 points ahead in Nevada, with a 3 point margin of error, the poll respondents are “likely voters”. But I contend “unlikely voters” will come out and help Trump clinch the victory this year.

Likely voters are defined as those who have voted at least 2 out of the last 4 Presidential elections. But this year we have seen a surge electorate in many states, especially Nevada. In 2014, about 32,000 Republicans turns out to vote in the caucasus. But this year, over 70,000 Republicans turned out to vote, a 100% increase over four years ago. That points to a surge of unlikely voters under the pollsters’ radar. With the polls so tight, if only 5 percent of unlikely voters turn out for Trump that would be enough to sway the election. But I believe we will see as high as a 12 point surge of unlikely voters come out on eleciton day. Voters go out and surge on election day.