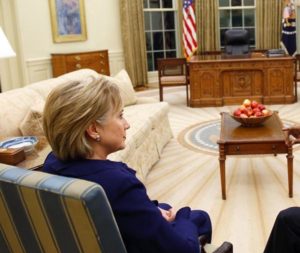 According to the Washington Post, Hillary Clinton is so confident she will win this November, she is already moving forward preparing her White House legislative agenda. Hillary Clinton is moving forward with her immigration plans to allow more muslim refugees in the US, give amnesty to over 10 million people here illegally, complete the nomination to fill the open seat on US Supreme Court and launch her own version of the 2009 trillion dollar stimulus bill to fund “Shovel Ready jobs.”

But many polls have tighten up and the debates this year maybe very important along with any further wikileak type surprises in October. A recent USC poll has Donlad Trump up by 1/2 a point this week. And Donald Trump is now dead even in Nevada, a bellwether state that has voted for the winning Presidential candidate for the past 20 years. And traditionally, the Presidential election doesn’t even really come into focus for most Americans until after labor day. A week is a life time in this election and with Hillary having some of the highest historic negatives she still has her work cut out for her. Hillary may want to stay focused before she starts measuring curtains in the oval office.