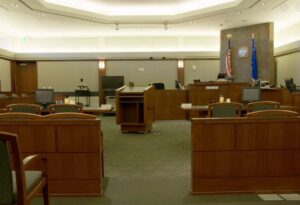 NVGOP attorney, Brian Hardy, filed a “intervenor motion” yesterday in the lawsuit the Teachers’ Union Never Trump infiltrators filed against the elected Real Clark County Chairman, Jesse Law. The fake Clark County Republican Central Committee (CCRCC) filed a lawsuit a week ago seeking to void the votes of some 100 plus CCRCC members who cast their votes for Jesse Law and his Pro-Trump slate. 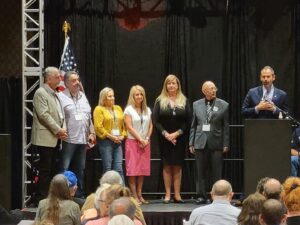 NVGOP’s “intervenor motion” calls Stephen Silberkraus the unelected self-appointed “Acting Chair” who “has no idea what the CCRCC is or how it operates”. NVGOP motion accuses Silberkraus of forming a non-profit corporation under the same name, “without notice or approval of the membership in 2020.”

In fact, Silberkraus filed his lawsuit on behalf of the non-profit, not the actual Nevada GOP sanctioned Clark County Republican Central Committee, oops. But does this explain where thousands of missing and unaccounted dollars went over the last year?

Hardy went on to tell the court, the Nevada Republican Party creates the various county central committees, so the NVGOP, not the Court, is the controlling authority over who is and is not the leader of the CCRCC. And since the NVGOP officially certified the July 28, 2021 election of Jesse Law as Chair and the Pro Trump slate, the court has no say in the actions of a political party. And even if the court wants to, under the bylaws and Nevada law, Jesse Law is the legal Chairman of the CCRCC.

The court is expected to hold a hearing on the NVGOP’s motion next week. 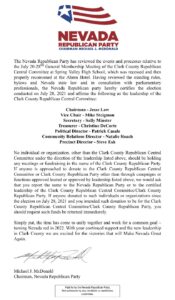